Here are a few facts about Ebola that will provide a reasonable approach to the disease and its risk to pets and their owners.

Where did Ebola come from?

The Ebola virus was first discovered in 1976 in the Democratic Republic of the Congo along the Ebola River. Since then, intermittent outbreaks in humans have occurred in Africa. In 2014, there were a handful of cases in Europe and North America.

There are 5 known species in the Ebola family. Some are more pathogenic than others and cause more severe disease.

How is Ebola transmitted? 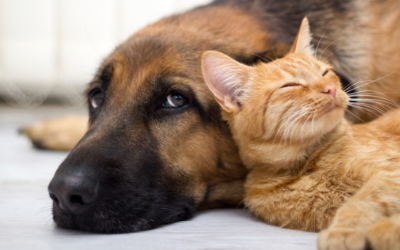 What species can be infected with Ebola?

In Africa, Ebola affects mammals such as humans, non-human primates (like monkeys and apes), and fruit bats. Bats are a natural reservoir for the virus in Africa and shed the virus in their feces.

In experimental studies, pigs infected with Ebola become mildly ill and may be capable of transmitting the disease to non-human primates; however, there are no recorded cases of humans contracting the disease from pigs. In North America, there have been no recorded cases of Ebola in pigs, bats, or non-human primates outside a laboratory setting. Since bats carry other diseases including rabies, contact with live or dead bats is discouraged no matter where you live.

What about dogs and Ebola?

"Ebola virus has never been directly isolated from a dog and there is no evidence that dogs carry or shed to virus to other animals or humans."

Ebola virus has never been directly isolated from a dog and there is no evidence that dogs carry or shed the virus to other animals or humans. Concern that dogs can infect humans is unwarranted at this time. There have been no recorded cases of Ebola in domestic dogs in North America.

Having said that, being infected with the virus is not the only way dogs can transmit the disease. They can potentially carry the virus on their coats and serve as a source of the virus much like a contaminated surface in a hospital could. While there is no confirmation that the virus can be transmitted on the fur or saliva of dogs, this possibility warrants attention. To be safe, it is best to keep all pets away from people who have been exposed to the Ebola virus.

What about cats and other pets?

There are no recorded cases of Ebola in cats or other pets. As with dogs, there is the possibility that the virus can live on their coats for short periods, but again, there is no confirmation of this.

As a precaution, the owner of any pet that is in close contact with an Ebola patient, and is at risk of exposure to the person's blood or body fluids, should consult a veterinarian. The veterinarian will, in turn, communicate with public health officials to determine how the dog should be handled.

"Caution tempered with common sense and good hygiene are effective tools to prevent spread of the virus."

Ebola is a scary disease, but a reasonable approach is best. Caution tempered with common sense and good hygiene are effective tools to prevent spread of the virus. It is nice to know that pet owners can enjoy the comfort of their pets without worrying about their risk of infection.

© Copyright 2019 LifeLearn Inc. Used and/or modified with permission under license.